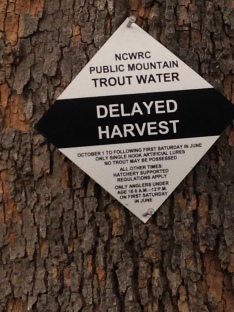 First of all, to those readers who do not live in North Carolina, we should probably explain the regulation. From October through the end of May, the designated streams, rivers or lakes are catch and release only, from June through the End of September the streams are catch and keep. All Streams are Stocked around the first of the following months of the year : October, November, December, March, April, and May. The list of stocking dates is published by the North Carolina Wildlife Resources Commission. Here’s the link- http://www.ncwildlife.org/Portals/0/Fishing/documents/TROUT_MAP.PDF

Delayed Harvest began in the late 1990’s as a pilot program on the Watauga River Near Boone, The  North Mills River in Henderson County, and in the South Mountains State Park near Connely Springs. The objective of the pilot program was to see if the commission could enhance angler experiences by allowing fish to be caught and released numerous times throughout the year, while stable water temperatures persisted in creeks and rivers in the North Carolina Mountains and foot hills. To make a long story short – they could never produce enough trout and they need to “get some more mileage out of their fish”.   The delayed harvest program now uses twenty five lakes, rivers and streams throughout the  foothills and mountains of the state.

Why its a good thing..

Delayed harvest is a great thing on many levels. First it creates an economic benefit to those areas that are close to the regulated streams. Second ,it takes pressure off of wild populations of fish by spreading anglers out to other streams and rivers that could not support a trout population. Third, it makes each fish raised in a hatchery more valuable as it’s time in the water making fishermen happy is greatly extended. Fourth, some of the fish do actually “get smart” and stay in the river after the catch and release part of the season  as “hold overs”.

A good thing for fly fisherman???? 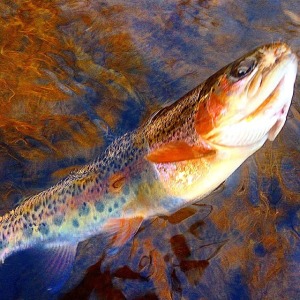 “it’s like shooting fish in a barrel baby!” I can just about hear Dick Vitale wailing those words while catching a trout on a Delayed Harvest stream. It is a lot of fun to go and catch fish when you know where they are and that they will eat just about anything.  Rivers and streams in this regulation allow you an opportunity to practice skills like setting the hook, or watching the strike indicator for subtle hits. Today I fished one hole for half  an hour, and i was able to work on my rather unimpressive and weak strip set. I caught ten fish on a yellow, blue, and brown wooly booger (my eight year old daughter is a fly designer and needs a sponsor), and set the hook while stripping on each fish. Large numbers of hungry fish allow any angler to improve with great strides in a day or a weekend spent on this type of regulation.

Delayed Harvest streams are great to guide on. I can’t even begin to fathom the numbers of people that have been brought to this sport and fell in love with it because they had access to numbers of hungry fish. These streams and rivers are also wonderful classrooms for young anglers to learn on.

This regulation also helps those of us who get “the fever”  or those never get rid of “the fever” to go catch a fish. I have seen a delayed harvest stream quell even the strongest fishing addict’s need to fish. Some years ago, I would regularly run into my truck mechanic on his lunch break, fishing for thirty minutes.. He would be in his work uniform, covered in grease,getting his lunch time fix. He later infected the parts manager at the dealership and he also became a regular DH user.

A few weeks ago I opened my big mouth at an industry event encouraging my piers to introduce their clients to  urban fisheries.( I Mean, hey man, Kraut creek in Boone has some nice holes, you can even fish behind the Boone mall… and lets face it lots of people fish these days) Several streams in the Delayed harvest  regulation  run through town parks or green ways.  In this sense DH can be another valuable asset to county or town managers seeking grants for improvements. Fish in your back yard or down the street from where you live… how cool is that?

While using a DH stream please practice proper catch and release techniques!  Make it a challenge – fish barbless for the day!… If you see a poacher, please make a call and report them. If you see trash, pick it up!

So this week Hit your local DH stream..Call your local fly shop or Trout Unlimited chapter and volunteer to help stock in April.. What? Your state does not have DH as a regulation? Make a call! get involved with your state Wildlife Agency.

Thanks for the Read!

Nils Peterson is a fly fishing guide and a professional woodworker in the off season. He lives with his family in the beautiful High Country of Western North Carolina. For booking information please send an email to browndogcww@gmail.com or call 828-964-8581 View all posts by West Fork Anglers